Long story short... My wife had to attend a two-day conference in downtown Louisville this week. She originally suggested that I stay at home with the toddler for two days and nights. That was, of course, a terrifying thought! Eventually I formulated a three-part plan that should work better for everybody, especially the toddler:

1) We go to Louisville with Momma.
2) We bring my own Mom for support.
3) We eat a lot, especially a lot of pizza.

I think it worked! Our first trip was a stroll up to Hard Rock Cafe at Fourth Street Live. If you're looking for the pizza pics, I saved the best for last so scroll on down to the bottom or click here... 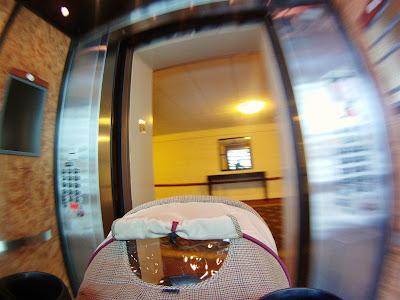 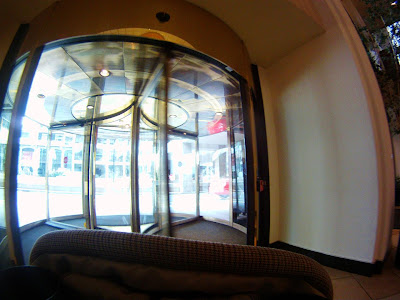 VERDICT (Hard Rock Cafe):  I guess it was just like any other Hard Rock Cafe. Everything is overpriced, and although you don't usually go there for the food, I have to say that both of our meals were really good. Surprisingly good! The noisy atmosphere made it a great place to entertain a kid who likes playing drums using silverware and the table. I'm glad we stopped by... 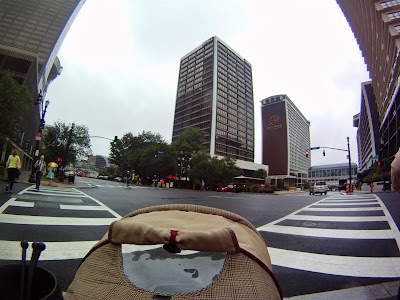 Dude wouldn't take a nap for me, but since he had almost fallen asleep on the way back to the hotel we thought another stroll through town might knock him out. It didn't work, but we had fun. 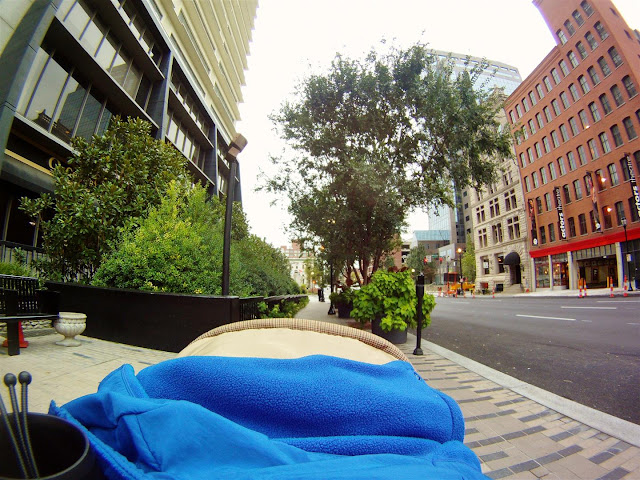 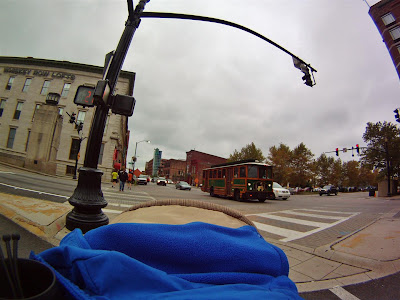 Of course Momma got our Big Little Man to sleep for a few hours after her work day. And then we were off to meet some friends at The Old Spaghetti Factory.

VERDICT (The Old Spaghetti Factory):  I guess it is just like any other Old Spaghetti Factory -- the prices are quite reasonable and the portions are a plenty. It's very family-friendy, and the atmosphere is fun. It's always a fine place to eat and catch up with friends. Someday I'm gonna eat in that caboose. Someday... 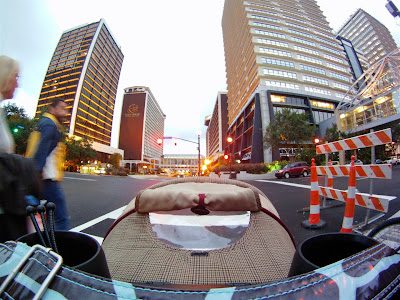 OK, so now for the fun part and the good food -- pizza!

The first stop was the highlight of my week. The Garage Bar is a new place in the hip NuLu neighborhood that features Neopolitan Pizza from a beautiful WFO. If you sit at the Ham & Oyster Bar [whatever that is], you can watch them work the oven. They also have a killer selection of craft beers and KY bourbons. I think the draft beer selections and the pizza menus rotate, so that's a good reason to visit often.


VERDICT (Garage Bar):  I love it -- love the concept, love the atmosphere, and especially love the pizza. I look forward to going back to see why they are so excited about Ham. I mean, I love Country Ham too, but without trying any of their platters I don't really understand what they're doing with it. So that's something to look forward to.

It's a new place, and I hope it works out. It's just a mile from the heart of downtown, so if you're ever in The 'Ville around dinner time, you should give it a shot (they aren't open for lunch). I know I'll make the quick detour off I-65 next time I'm cruising through town.


The next pizza stop was another new establishment -- Coals Artisan Pizza. It's a few miles from downtown in the St. Matthews area, so we stopped by for lunch on our way home. They feature an anthracite coal-burning oven that can operate at 900 - 1000 degrees. I'm guessing it's the only commercial coal-burning pizza oven in the state? As far as non-gas and non-electric pizza ovens go, coal is a popular choice in NYC, but not as popular as wood elsewhere in the country. I'm glad these folks brought it to Kentucky! 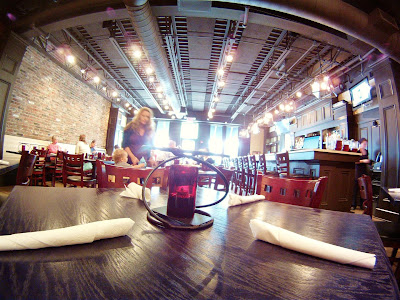 VERDICT (Coals Artisan Pizza):  Great place! We were in a bit of a hurry and we arrived during the lunch rush, but our pizzas were still ready in just a few minutes. The staff couldn't have been any friendlier, and the pizzas were perfectly cooked.

I spoke with the co-owner for a few minutes and she made it clear that 1) they are passionate about pizza, and 2) they are making an American-style pizza and not a Neapolitan-style pie. They use high protein flour and a long ferment to make a slightly firmer and chewier crust, for example.

Personally, I've been obsessed with the Italian-style pies since we started building our wood-fired oven at home. I relish every chance to sample a VPN-type pizza and I consider it a learning experience. There's also a novelty factor involved since we don't have any such pizzerias close to home. While I might prefer something from Smashing Tomato or Garage Bar right now, the rest of my family would choose Coals all day long. Momma said this was the best pizza she's had in some time, including the ones we cooked last weekend (still learning). Let's just say I didn't get to try the Hamburger pizza because it was consumed too fast!

You can't really compare Coals with Garage Bar because they don't have much in common, except for the fact that they both serve great pizza. I enjoyed going to Garage Bar late at night by myself, and I enjoyed visiting Coals for lunch with [most of] the family. If you like pizza, you should try both. Their products are definitely a step or two above anything I've had in Bowling Green, and I look forward to return visits.

UPDATE (9/11/11):  The people at Coals told me there is another strict Neapolitan-style pizzeria coming to Louisville called MozzaPi, and apparently they really know what they're doing. I'm not sure how I'll fit three pizzeria visits into my next Louisville trip, but you can bet I'll try!


UPDATE II (11/27/11):  Pizza brings people together. It's something I've realized over the past year or so since we started building our Pizza Oven Patio. That project is the reason I was introduced to Double-A-Ron Harris, a Pizza Aficionado Extraordinaire who has also been serving as my Pizza Oven Coach (he's a very patient guy). Without Aaron, I would not have known about Garage Bar or Coals Artisan Pizza. Without Madeline at Coals, I would not have known about MozzaPi. Without MozzaPi, I would not be writing this update about one of my most memorable meals ever. And I would also still suck at making pizza.

A week ago my wife and I had the privilege of eating dinner with the MozzaPi crew at owner Tom Edwards' home in Louisville. Wow! I knew it was going to be a fun night when I saw not one, but TWO wood-fired ovens on the patio. That's a first for me, especially considering that I've only seen two examples in all of Warren County. It was an experience I won't soon forget.

MozzaPi spent the summer selling pizzas out of a food truck that carried a huge two-ton WFO around town, getting feedback and perfecting their recipes while preparing to open the real restaurant on Bardstown Road. On this night we were treated to some of the appetizers, pizzas, and desserts that will be on the restaurant menu. I did not bring a camera, but the MozzaPi blog has a post that accurately described the menu and featured a few pictures. I'm happy to say their food is every bit as good as it looks!

[NOTE:  The whole blog is definitely worth reading. There is some really cool stuff on there, especially if you love pizza and daydream about jetting off to Naples or San Fran to eat some. They have great pics of pizzas from all over, and it's interesting to read about how the business got started.]

One particular pizza blew my mind last weekend -- without doubt, it was the best and most interesting pie I've ever eaten. They call it the El Cap and it features Sweet Onion Marmalade & Gorgonzola along with a few other toppings. I've spent the last week trying to make my own marmalade and recreate that pairing, putting it on everything from Turkey Burgers to Thanksgiving Day Appetizers. And I've been loving it. So I'm super stoked about trying their most popular pizza -- the Thai Pi. If it's better than the El Cap it must be really special. When that restaurant opens one day soon, I'll be driving back to Louisville in a hurry.

In addition to the killer food, it was a really neat opportunity to spend a couple hours talking pizza with people who have cooked thousands of pies. This is a fun and friendly group, and it's amazing how much you can learn just by watching some experts do what they do for awhile (and asking a ton of questions). I've fired up our oven a couple times over the last few days and made my best pizzas yet, mostly because of the tips I picked up last weekend, and also because I finally started listening to Aaron's dough advice. The MozzaPi Margherita really showed my wife how good a simple Italian-style pizza can be -- apparently my first few attempts did not exactly convince her, but she actually liked the ones we made this week! This was the first time I've made pizzas without having any Pepperoni on hand and nobody missed it.

So I think we've turned a corner and I have to thank Tom, Justyne, and the whole MozzaPi gang for the invitation, the inspiration, and the superb dining experience! I wish them the best of luck with this new venture. I know how good some of the food is, and it sounds like their restaurant concept will provide a healthy and unique experience that you should look forward to, also. I certainly look forward to visiting and reporting back.

UPDATE III (12/4/11):  I just heard that Louisville Magazine named Coals the best pizza in Louisville. Congrats, Coals! As the Louisville pizza wars are really heating up, I bet they're proud of that honor. When MozzaPi opens I'm hoping to do a two-day Louisville Pizza Tour and the first stop will probably be Coals. I've learned a lot about pizza since my first visit and it looks like they've expanded their menu quite a bit, so I can't wait to try it again.

So anyway, at the end of last night's oven firing I found myself with a few leftovers and a plenty hot oven. I tried making a mini version of the Garage Bar Country Ham Pizza pictured above, and it turned out pretty good. I think I'll be using 5oz dough balls more often now, especially for the kids. I can't wait to return to Louisville and steal some more ideas. Eh eh...