It wasn't supposed to be a Garage Pot Roast.  It was just supposed to be an easy carefree New Years Day dinner.  And I didn't plan on doing a post about it, but by the end of the day we had some pretty cool iPhone/iPod pictures, so why not?  My 12-year-old assistant got a new iPod a few days ago and his favorite feature is the camera.  We slapped Instagram on it and practiced a lot today.

As far as easy meals go, it doesn't get much easier than pot roast.  Throw some meat (usually a cheap beef roast), a few veggies, and some wine or broth in a slow cooker and forget about it for a few hours.  After a late night, it's a perfect idea for dinner on a lazy day like this.


Since this was my first time using lamb shanks I wanted to keep it really simple, so we just added carrots, celery, onion, and garlic.  If I had any fresh herbs or mushrooms on hand I would have used them, but no luck.  Other than rubbing the meat with salt and pepper, there were no added spices.


This has become my favorite red wine for cooking.  It certainly makes a mean steak sauce! 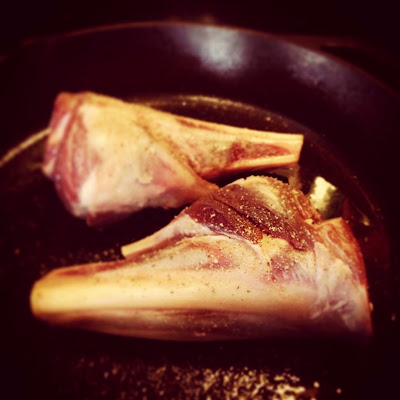 First we brown the lamb shanks using a little olive oil, salt, and pepper.  While this is happening, it just takes a minute or two to cut the celery & onions, and smash a few garlic cloves.  I like big baby carrots because they don't have to be peeled or cut.


Throw in about half the veggies, then the browned meat, and then the rest of the veggies before adding the whole bottle of wine.  If you want more liquid you can add beef broth or water, but it might not be necessary.


Now you can just crank the Crock-Pot to High and leave it alone for the day.  Or so I thought.

Somehow, my wife had been completely oblivious to all kitchen activity that had so far taken place this year.  About an hour after I turned the Crock-Pot on, she started telling us that something smelled like garlic.  [No kidding!]  About a half hour after that, she had determined that I stunk and needed a shower.  That's when I finally pointed to the Crock-Pot.  She pointed to the garage.


That's cool.  I love it out here!  This is where my favorite things that aren't people live, and it's about time this room smelled good.  While relocating this operation I found some white radish from Need More Acres that had been forgotten, so I threw those in the pot and gave everything a quick stir.  And that's how the Garage Pot Roast was born.

The next several hours were pretty awesome:  we played football video games, watched football on TV, and threw football 'till our hands froze off, while occasionally wandering out to the garage to check on our project and make sure it smelled even better than the last time we checked.  It always did.  It always does.

After six hours, it should probably be about ready.  The meat should be falling off the bone when you stir and the veggies should be plenty tender by now.  At this point you can lower the heat to Low or Warm and eat whenever you want.

I'm pretty sure this will be a New Years Day tradition from now on.  I never really caught on to Hoppin' John or the black-eyed peas thing.  From now on, my year starts with a Garage Pot Roast.  I'll probably jazz it up a bit with some herbs next time, if I have any handy.  If not, this super simple version is just fine with me...


UPDATE (1/2/13):  On New Years Eve we had a Fondue Party.  It was wild and crazy, or not.  We did several Melting Pot recipes, which are spot-on, by the way.  Buy their cookbook and it's really easy to make the same recipes that you get in the restaurant at a greatly reduced price.  And it's fun.

So, today we're stuck with leftover cheese, wine, and pot roast.  Seemed like a good idea to combine them, and it was...