Forty. So what? I guess it's better to reach forty than to not reach forty, but that's about all the thought I've put into it. Until a few hours ago when I'm sitting on the deck with friends, watching Momma and the kids play in the yard, smelling the chicken-wing smoke wafting from the grill, and enjoying the temporary canvas some wispy clouds provided the setting sun.

That grill. Hard to not think about that grill. That grill has been with me for all of my thirties. Is that really possible? Has it really been ten years?

Ten years ago I was plotting my escape from California to return home and get to know a four-year-old and his mom a bit better. I was also flying back and forth for a spate of September weddings. Both business partners and a brother were getting married. I missed one and was Best Man in two. Two years prior I'd been crisscrossing the country to return home for two other September weddings, so I figured that's just what happens at that age. September happens. The biggest thing I learned in those months was that a German Shepard can unzip your unattended backpack, dump your laptop into your mom's kitchen sink, and turn on the faucet. But that's another story, and I certainly wasn't giving much thought to turning thirty.

Three months later I moved back to Kentucky with a California Jeep and a California motorcycle. A little rental farmhouse was waiting for me, and it needed a grill. More importantly, I needed a grill after five years of small SoCal apartment dwelling. So I bought this here Weber kettle. I scored the floor model from Home Depot -- not because I wanted a discount, but because I didn't want to put one together. Some things never change.

Actually, I reckon a lot has changed since then. The little farmhouse gave way to a bigger house down the road, but not before letting us get married in the front yard. Mortgage payments and car payments gave way to college funds. That four-year-old is now fourteen with a four-year-old little buddy of his own. Those five September marriages are celebrating two 12-year-anniversaries, three 10-year-anniversaries, and 10 neat little new people in the world this year.

In the sleep-deprived anxiety-driven blur that was my 30-39, the one thing I could count on was grill therapy. Sometimes it's too cold, too dark, or too wet to sort things out in your head with a back road twist of the wrist (at least for this fair weather rider). But no matter the season and no matter the weather, the Weber was always ready to go when I needed to start a fire, whether people needed to eat or not. If I did figure anything out over the past ten years, it probably happened on the patio while the coals were burning and the smoke was rolling. I learned a lot about grilling, but hopefully I learned more than that.

So I'll just ride on, grill on, and wok on. Hopefully ten years from now we'll take time to celebrate the big 5-0. Hopefully the same friends will be hanging out on the patio and hopefully more than a few new ones will be there, too. Maybe the 24-year-old and the 14-year-old can handle the grilling that day, and if there's another four-year-old running around the yard it better not be mine!

One thing's for sure... I know which grill we'll be using.

UPDATE:  It was an awesome birthday. After Momma went to work, I let Little Man skip school so he could help me with the shopping and the grilling before some family stopped by for snacks. Dude even picked me out a Happy Birthday cupcake! 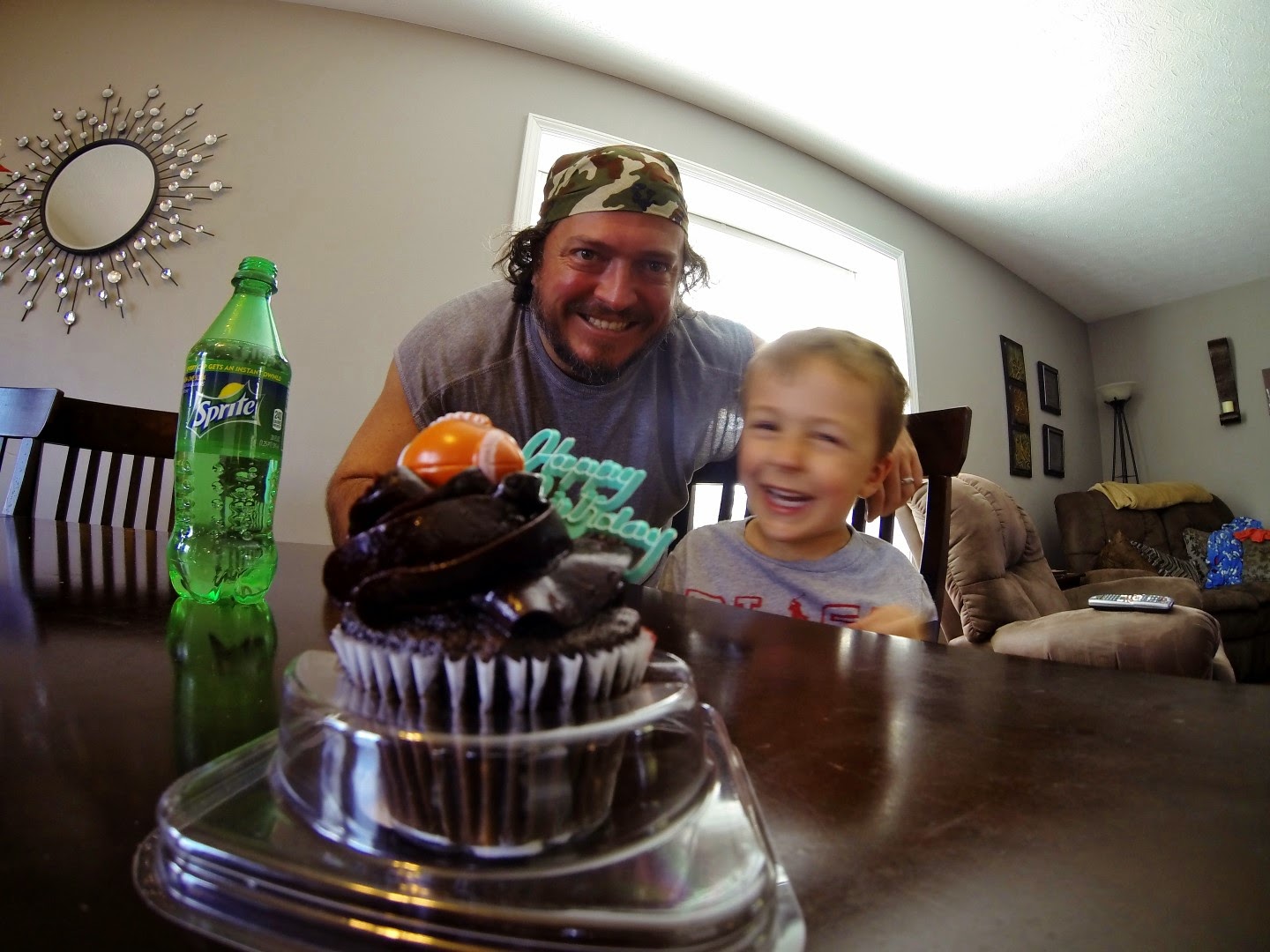 
UPDATE II:  A loyal reader pointed out that I forgot something. This happened once before, and this is how I know there might be two loyal readers.

No secret that Home Cafe is our favorite restaurant in BG. Maybe anywhere. Josh & Chelsey are rock stars around here, and never more so than each year when they serve up their Oktoberfest menu.

I have no idea how they create so much great food in that small restaurant, but this is one of those days when there are more customers than seats. If you've never been, make a point to visit next year. It's the perfect family-style menu and if you have a table full it's easy to go through the whole menu before going back for more.


So, that was fun. A few hours later when my wife wanted more pretzels I figured that was a good excuse to get another brat, so we called an order in. Pretzels were already sold out, but brats and dessert were still available...