I should start by saying a few words about the guest bike:  AWESOME!

It kinda makes my V-Twins seem heavy and slow, so I don't want to talk much about performance. I'll just say it feels like it wants to go seriously fast to have serious fun. And what it might lack in personality, it certainly makes up for in function. It's a Honda, so it does everything right. You name it -- clutch, gearbox, throttle response, brake feel, suspension -- everything just works proper. I had almost forgot what it was like to ride with functioning mirrors. 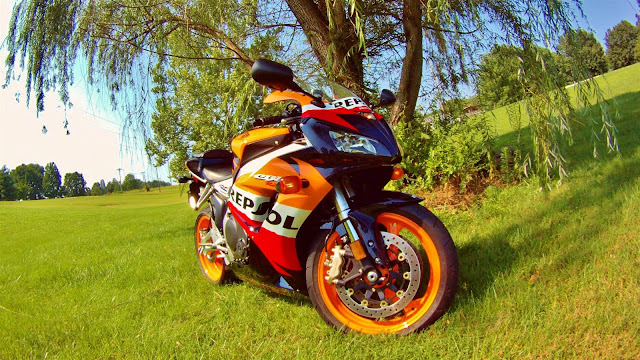 Of course, what makes this bike special is the Limited Edition Repsol Replica livery, inspired by the HRC Honda that Owensboro native Nicky Hayden used to win the 2006 MotoGP Championship. Road racing fans are a passionate bunch, and while some were quick to discount Nick's World Championship because he won only two races that year and GOAT-candidate Valentino Rossi suffered some mechanical issues, the truth is that he went into the final race of the season with a broken shoulder and down on points to Rossi. It was a one-race two-man battle for the title, and The Kentucky Kid emerged victorious in Valencia!

All three Hayden Brothers have won national road racing Championships, and whenever I run into any of 'em I always thank them for representing Kentucky so well. On that day in Spain, the middle brother took it to the highest level. He did the impossible -- he stole the biggest prize from the greatest racer alive. He had reached the pinnacle of road racing, and he was bringing that trophy home. That's how you represent!


The well-deserved Championship was built on a foundation of consistent podium finishes and a country-bred work ethic, then topped off with a sheer will that helped overcome some odd late-season adversity. It was a perfect example for my boys of what can be achieved with a positive attitude, hard work, & solid family support. It was epic.

I laughed. I cried. I still believe it was the greatest moment in Kentucky history since about 1792.

The best thing about BBQ is that it varies so much from one region to the next, and Daviess County BBQ is known specifically for two things: Mutton & Burgoo. Mutton is the meat from an older sheep and Burgoo is basically a BBQ stew.

It only seemed right to take this particular bike on a pilgrimage to the homeland to sample of a bit of both... 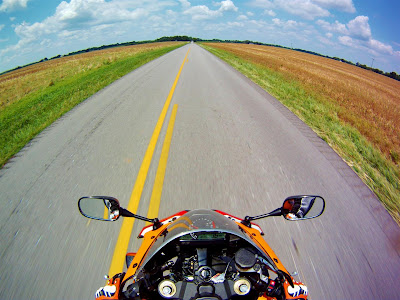 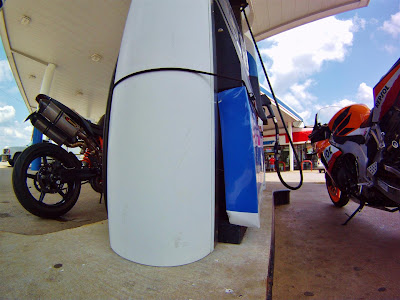 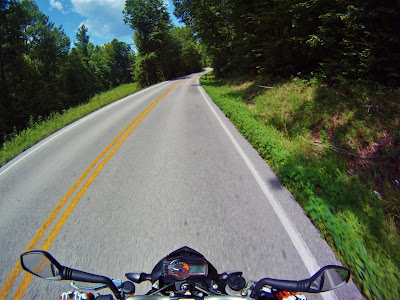 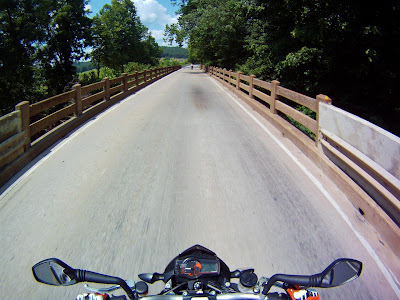 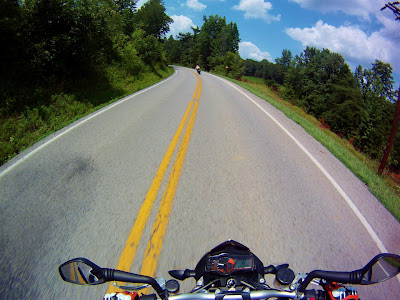 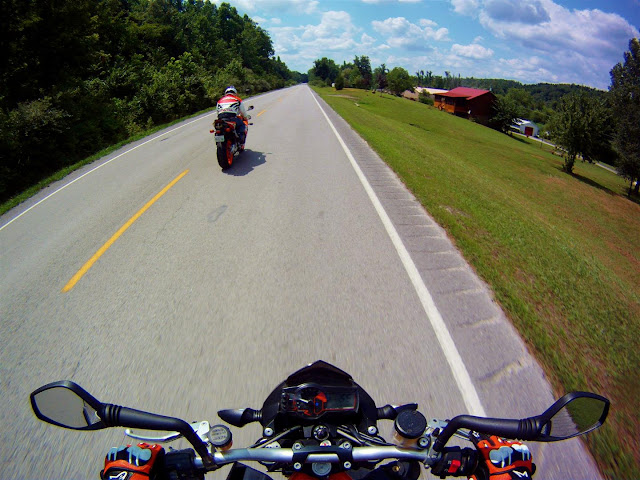 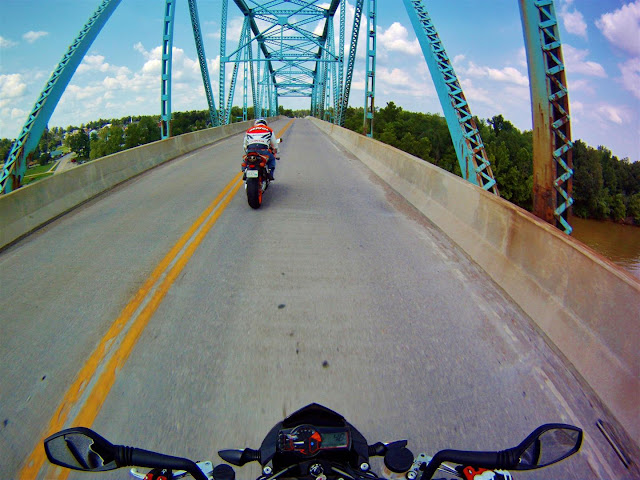 VERDICT:  I cannot offer a fair verdict in this case, and that's because I made a huge mistake. I should have perused the menu more carefully, or asked the waitress more questions. I should have ordered my meats "off the pit," as they say -- that would be dry with the sauce on the side. To be clear, I did not dislike their sauce. But it did overpower any hickory smoked flavor in the Mutton and Chopped Pork, and I'm sure my experience would have been better had I ordered properly.

The Pork Ribs were my favorite item on the plate because with a lower sauce-to-meat ratio it was possible to get a true taste of the BBQ. And they really couldn't have been cooked better. Along those same lines, the Mutton was more tender than I expected for such a tough meat. The texture and the taste reminded both Mark and I of a slow cooked beef roast (with BBQ sauce). So it wasn't a big surprise that the Burgoo, which contains plenty of Mutton, tasted much like a nice vegetable beef stew (with BBQ sauce).

There was nothing remarkable about any of the side items, though the portion sizes were just right and I don't think people come here for potato salad or beans or fries, anyway. The meat menu is extensive: Mutton, Mutton Ribs, Pork, Pork Ribs, Chicken, Turkey, Ham, and Catfish. You can choose any three of those meats & two sides if you order the Combination Plate, and you'll definitely get your money's worth.

I look forward to a return visit where I get my order right and I can sample some Mutton Ribs. I shall report back. 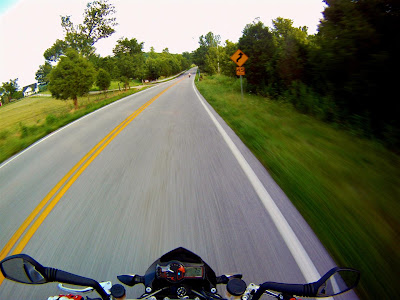 UPDATE (12/4/12):  A different route in a different Honda going back to Owensboro on a day with very different weather for a different reason.  I wasn't there for BBQ, but I couldn't help but stop by Old Hickory and grab some to take home.  I've become more familiar with Owensboro's black dip since my first visit, and I do like it, but I don't like my meats drenched in it.  I much prefer Old Hickory's BBQ "off the pit" with some sauce on the side. 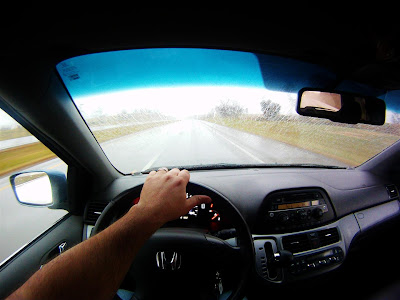 The real reason I was in town was to get my paintings signed by the man himself...

Bike:  Honda CBR1000RR Repsol - Limited Edition
Route:  Google Maps (Split Tree is at Checkpoint B, even though Google Maps thinks it is somewhere else.)

It's true that Split Tree is less than one mile from my house. But with a pre-lunch trip to the gas station and a few miles of post-lunch back roads, this trip filled up my lunch break nicely. And it was perfectly timed as I just beat the storm home. 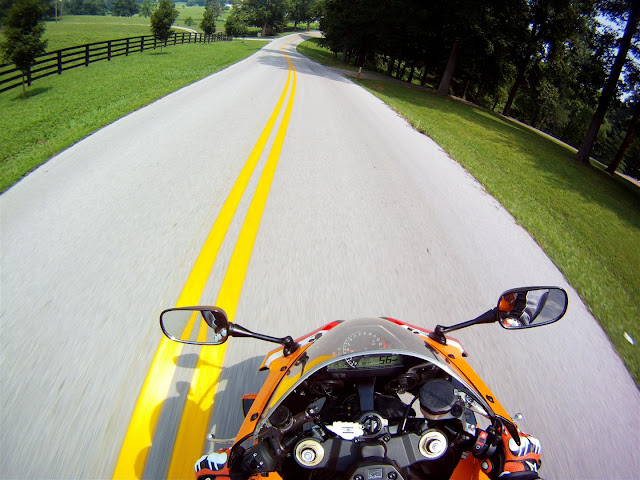 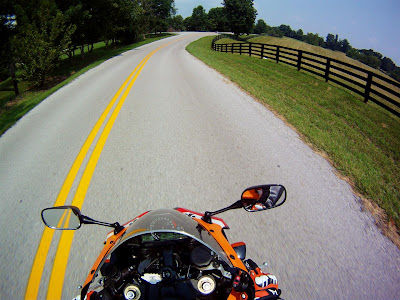 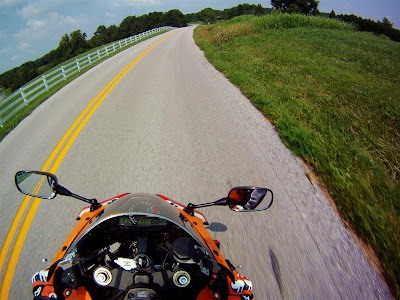 VERDICT:  When I think BBQ, I think Split Tree. Jerome's pulled pork (which they served "Chopped" or "Sliced") is the standard by which I judge all others. It has a perfect smoke flavor and while it's not exactly moist, it is certainly not too dry. Whether you order it chopped or sliced, the texture is perfect. The product at some other places is so finely shredded and so moist that I'm left wondering what kind of machine created it. But here you can watch them slice or chop your order, so there is no mystery.

The house BBQ sauce is a rather thick and slightly sweet tomato & vinegar affair with just a bit of spice. I like it with the ribs or chicken, and I often order extra sauce to take home for other uses. But the pork is so good that I prefer it without sauce. If you order a sandwich, ask for the sauce on the side so you can decide for yourself.

They keep everything simple here by concentrating on just three things: Pork (chopped or sliced), Ribs, & Chicken. Everything is smoked over hickory (only hickory) and the smoker is running seven days/nights per week. The quality is remarkably consistent from one visit to the next.

Of course they offer the typical side items: Potato Salad, Coleslaw, and BBQ Beans. But there is nothing typical about the beans! They contain plenty of pepper, pork, and something else. Magic, maybe? Sweet, sweet, wood-fired magic? I quit trying to figure it out. I just mix a little of the house sauce with these beans and it's a meal by itself.

Located less than ten minutes off I-65, this place is most definitely worth the short detour if you're ever passing through. 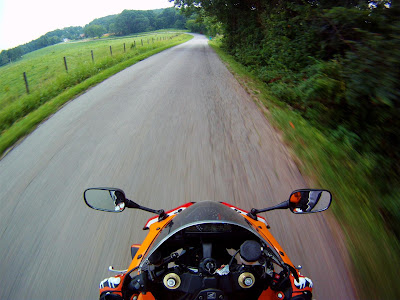 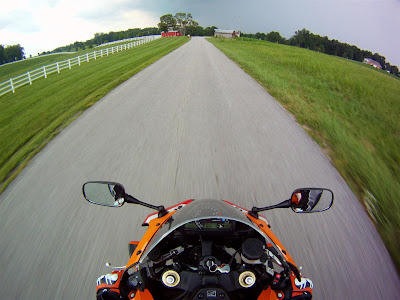 UPDATE:  When I ran out of time to fire up my own grill for dinner, I went back to Split Tree to grab some more BBQ. Is that wrong?  I was hoping to get some chicken, but I got there after closing time and they were all out. Having overdosed on pork in the past and not wanting to do that again, I didn't actually eat more for dinner. But I did take the opportunity to snap a couple more pictures. Update II will show the BBQ Chicken. Soon.


UPDATE II (7/13/11):  I had to grab some take-out for lunch from somewhere today, so here's the BBQ Chicken. I ordered two Chicken Halves, and they were just ready to come off the smoker. I'm a white-meat guy, and I was surprised how moist the breast was. And you don't need a fork & knife, as the meat is already falling off the bone.


So, there it is... the whole Split Tree menu in two days! That was fun.

It's not quite Christmastime yet, but in a couple weeks somebody in our house is getting his first motorcycle as a surprise gift. It's not brand new because if things go well we'll probably outgrow it next year and be ready for something bigger in 2013, anyway. It just had some engine work done at a local shop and it should be ready to go for Spring, and of course I wanted to give it a quick test ride before I hide it in the neighbor's garage. So, since it was around lunch time and my napping wife was unable to stop me, I present...

The shortest Countryside Food Ride ever!

Trying not to get arrested, I did have to break Rule #3. No worries -- that's a soft rule, and this was fun! And if it's fun for someone running about 80 pounds over the weight limit, it should be a lot more fun for the one about 40 pounds under... 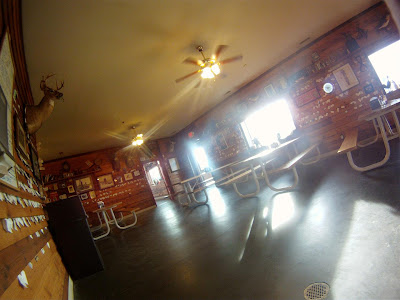 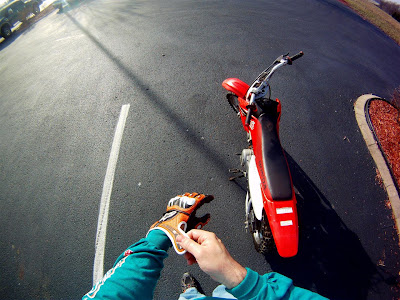 UPDATE IV (12/23/11):  Now time for my Christmas present -- a Split Tree Smoked Turkey! I can't tell you how good this place smells while 30 turkeys that just came off the smoker are waiting to be picked up...