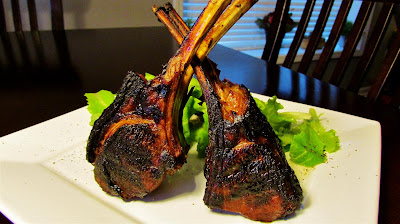 We've been buying chicken, eggs, beef, and various cuts of lamb from River Cottage Farm at our favorite Farmers Market for almost a year now.  It's where I got the lamb shanks for the New Years Day Garage Pot Roast a couple months ago, for example.  We keep going back because it's good stuff, and I'm especially fond of their lamb.

We've never tried a rack of lamb and I had to wait a few weeks to get my hands on this one.  This is something special.  Not wanting to screw it up, I asked Meathead from Amazing Ribs for some advice.  He suggested cutting it up into two-bone chops and marinating in his Sheep Dip before grilling.  The idea is that with the smaller chops you'll get a bit of the dark crust with each bite.  So that's what we did.  And I'm really glad we did.

You can find the Sheep Dip recipe here, along with some other good advice about grilling lamb.  We added a tablespoon of fresh chopped mint leaves.

Two steps are not pictured:


They were grilled over a hot fire for 12-15 minutes and flipped often as there are really four sides to the chops when cut this way.  I pulled them when the bigger chops were at 125 degrees, so the smaller chops were closer to medium than medium-well after resting for a few minutes.  Perfect -- big medium chops for the adults, smaller medium-well chops for the kids.


Adam Lang Perry's Charred & Scruffed introduced me to the board dressing concept, and this is the first time we've tried it.  The idea is pretty simple and it makes sense -- after you grill the meat and while you're letting it rest, why not flip it around in some oil & herbs to enhance the flavor?  Here we used some of the same ingredients used in the Sheep Dip -- olive oil, garlic, rosemary, and mint.  I'll be doing this more often.

My favorite grilled meal of the year.  I don't have words to describe how good this is, so you'll just have to try it yourself.  If you're in this part of the country, I highly suggest getting your lamb from Debbie at our Farmers Market.  While you're there, you can also stock up on beef from Steve of Dolan Farms and pork from Bill & Linda of Stoney Creek Farm.  You'll be glad you did. I always am.


There are few things I like more than lamb with mint jelly.  This pic is for our friend Steve from Borderland Farms who always likes to see a little green on the plate.  Or a lot.  Interestingly, he produces THE best strawberries we've ever had, and they're not green. 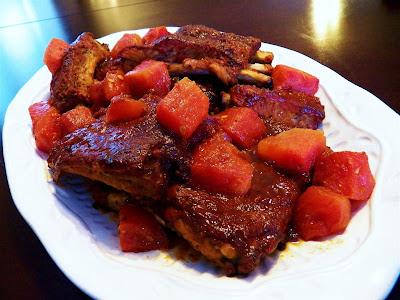 The first CFR recipe post was made one year ago when we did a Bacon Explosion for the Super Bowl party.  Well, it's Super Bowl time again and it seems like a good idea to copy another recipe (or three).  Two in a row means it is now a tradition.

If you live in this part of the country, you've most likely heard people talk about the Loveless Cafe and perhaps you've been there yourself.  Unfortunately I have not, but I have listened to people rave about their breakfast for years, specifically their famous biscuits.  I've also heard mention of their Watermelon Ribs, but never really given them much thought until I read this article about Loveless Pitmaster George Harvell.  I reckon he has the perfect job!  The pictures of the ribs on that page were hard to ignore, and a few minutes spent browsing their website revealed two things:

I look forward to an all day Countryside Food Ride where I can hit Loveless for some of those breakfast biscuits, ride Natchez Trace down and back, and then hit Loveless for another meal before heading home.  But that'll have to wait for spring or summer, and it probably won't happen on a Thursday, and I don't want to wait for these ribs.  So we made them for the Super Bowl.

The wonderfully simple recipe for Loveless Cafe Watermelon Ribs can be found here.


Yes, it's fun and satisfying to make your own rub and your own BBQ sauce, but today we were trying to replicate the dish as served at Loveless.  So I ordered their rub and BBQ sauce from the website.  The rub was spicier than I expected and it looks just like the rub you see George working with in this video where he briefly describes it.  The sauce is about what I expected -- dark red, thick, and sweet.


All the ingredients.  Pretty simple, huh?  I only used about 1/3 of the rub/brown sugar mixture on these two racks of ribs.  Not pictured is a smaller third rack that was not intended to be watermelon ribs.  I let it finish on the smoker for comparison -- it got the Loveless rub (no extra brown sugar) and was finished with the Loveless BBQ sauce.

[Cutting and trimming St. Louis style ribs is not my specialty.  It took me about thirty minutes to do the three racks.  This is probably why I prefer baby backs.] 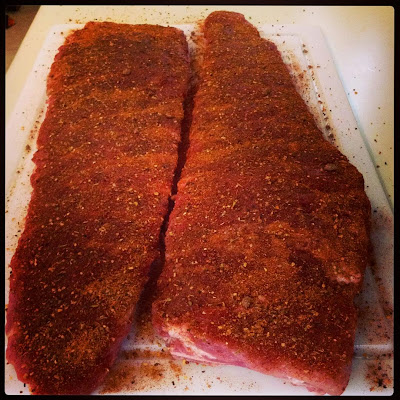 As I finished preparing the smoker, my 12-year-old assistant took this picture of the rubbed ribs.  It was better than my picture, so there it is. 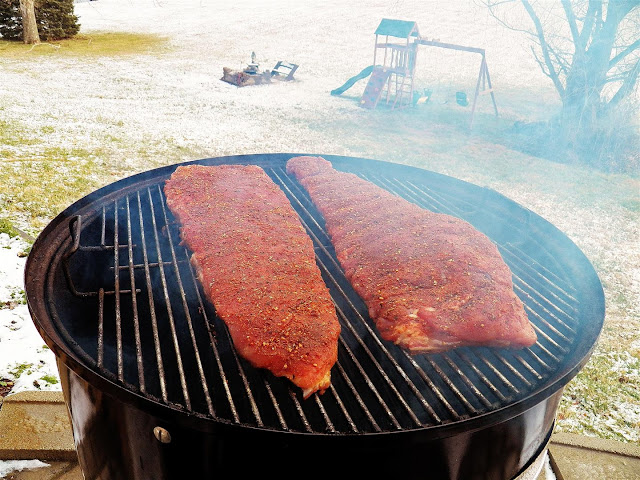 The two big racks went on the top grate of a Weber Smokey Mountain cooker, with the third rack on the lower grate.  We used hickory for smoke and tried to keep the temp around 225.


With a few hours to kill, we set about preparing our second borrowed recipe -- 16 Bean Soup for Momma.  This is something I never considered making until our friends at Stoney Creek Farm showed up at the market yesterday with smoked ham hocks.  They gave me a rough recipe idea that sounded like fun, and it was fun.  It made the house smell great while the ribs did the same for the backyard. 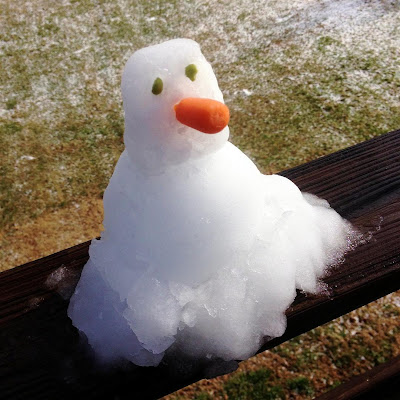 
At the two hour mark the smoker was staying steady between 225 and 250 without much effort on my part.


At the three hour mark, we pulled the big ribs off and moved the smaller rack up to the top grate.


The smoked ribs were done a few minutes before the watermelon ribs were ready to come out of the oven.  Good timing to allow for a comparison.

They smell incredible coming out of the oven and at first glance you can see the meat falling off the bone.  Based on appearance, you probably wouldn't think that these ribs had been smoked at all -- they do look like they've been braised and you can't see the smoke ring that is hidden under the sauce until you start cutting off individual ribs.

I really like the Loveless dry rub & BBQ sauce on both sets of ribs.  Together they provide a nice combination of sweet and heat that compliments the smoke flavor quite well.  The watermelon ribs differ from the smoked ribs in two ways -- texture and sweetness.

The smoked ribs aren't chewy, but they do need a little tug before the meat pulls cleanly off the bone.  On the other hand, the watermelon ribs are truly fall-off-the-bone tender and after braising they seem more moist.  I was a bit surprised that the watermelon ribs retained so much of the smoke flavor that we love, and on top of that was the added sweetness from the brown sugar plus the subtle yet unmistakable taste of watermelon.

Properly smoked ribs are one of my favorite things on the planet, but after trying them side-by-side with the watermelon version my beloved smoked ribs seemed to taste a little... flat.  We ate more watermelon ribs than smoked ribs, and not just because there were more of them to eat.

Next time I'll cut them into two-rib sections and serve them without the watermelon chunks to see if unsuspecting guests are surprised by the flavor.  I'll also use more sauce.  Comparing these pictures to the Loveless pictures, I think each rack (or each pan) should probably get almost one full bottle.  And although Loveless recommends spare ribs for this recipe, I'll have to see how it works with baby backs.

I don't know what this soup is supposed to look or taste like, but it was a big hit around here.  We'll make it again as soon as I can get another one of those smoked ham hocks.  I feel sorry for people who use the artificial ham flavoring packet.


Halftime.  For our third borrowed recipe, we prepared some hot wings using Kenji's method from The Food Lab.  They were fried [earlier in the day]... and then fried again [at halftime]... and then tossed in Buffalo Wing Sauce from our Hillbilly Griller friends.  They were perfect.

All in all, a pretty good day of cooking, eating, and watching football.  For some reason it felt a little bit like Christmas again.

We don't care too much about the 49ers or the Ravens, but here in Hilltopper Country this game was a pretty big deal.  Jack Harbaugh coached our football team to a national championship, and more importantly he saved WKU's football program with a lot of help from both Jim and John.  While I'll never understand Jim's play calls from the five yard line on that last drive, it was certainly an exciting game.  And congrats to the rookie from WKU, Bobby Rainey, on getting that ring!  Another lesson in how a hard work ethic pays off -- undrafted, he won a roster spot based on his preseason performance.  Although he never played a regular season game, he is a Super Bowl Champion in just his first year away from the hill.  Well done, sir.

Till next year when we copy somebody else's recipe(s), here's to hoping I find myself in Nashville on a Thursday afternoon sometime soon so I can sample the real deal...

UPDATE (5/21/14):  George showed the Watermelon Ribs recipe to the world on the Today show this morning. He also shared the rub recipe here.