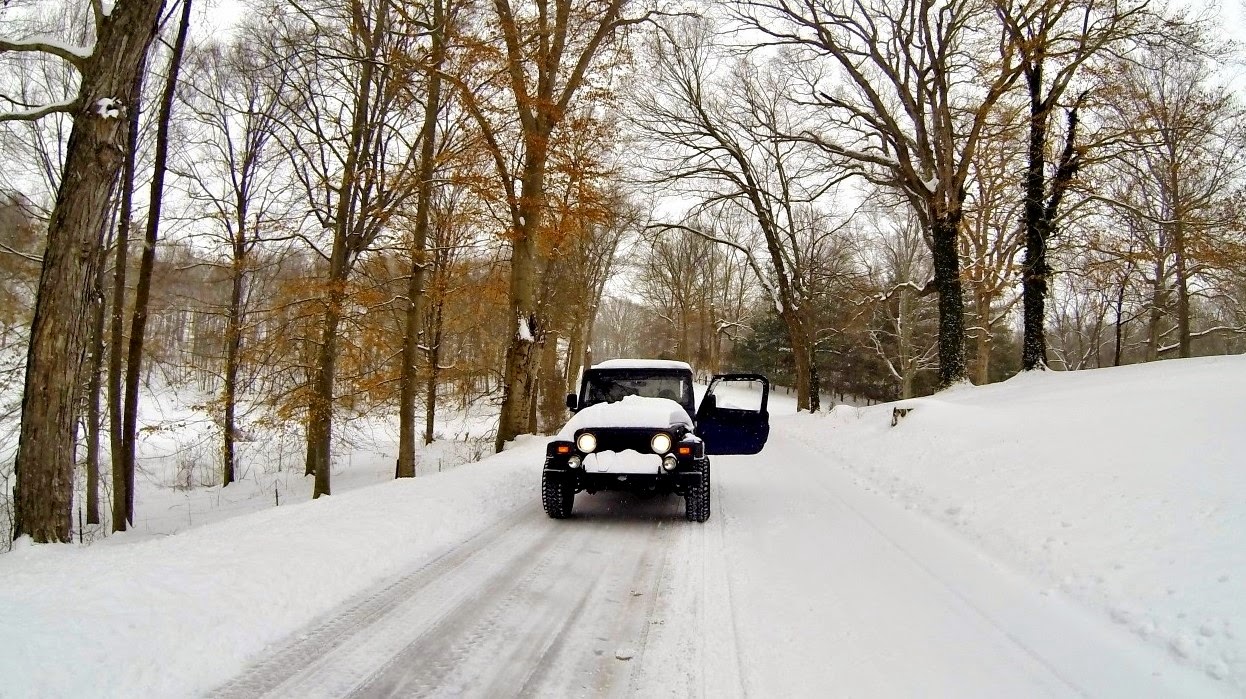 Snowpocalypse 2015! Snowzilla! Snowmageddon! Snowbama! OK, I made that last one up. I think we used to just call it a blizzard? I call it our biggest one-day snowfall since the '60s. This one came at a really bad time, as I had to leave in just a few days for a two-week work trip (some work trips are better than others -- details in the next post). But there was still time for fun and there certainly wouldn't be any school this week, so what to do?

Anyway, if we can't go sledding or build a snowman we might as well go for a drive.


Unfortunately a plow drove by five minutes before we left. Not real happy about that! Kinda messed up my pics, but what can you do?

So, after having fun all day, it's almost dusk and time to get smoking. This is to test a new BBQ Guru Party Q on a 22" WSM to see how long it will keep a good steady temperature in really cold weather without refueling. Since it's colder overnight, overnight it is.

I also had some good meat from local farms that needed to be cooked before I leave town: beef brisket from Dolan Farms, a small Boston Butt from Hickory Lane Farm, and some beautiful beef short ribs from River Cottage Farm. Just as an experiment I seasoned all three with nothing but salt & pepper.

I finished the pork & brisket in the oven in order to get some sleep, but I left the iGrill2 and the Party Q running so I could download the graph in the morning.

So, some notes from the test:

Sweet! If I lit the coals properly I'm sure it would have gone a lot longer, and this was already a lot better than I would do when manually adjusting the vents in much better weather. So, I'm stoked and ready to do some better tests in better weather soon. Happy with the Party Q!

The pork was pulled and brisket sliced the next morning...

Next up was some cold weather grilling, mostly for fun and partly because I really needed to cook more food before leaving town. First, some pork tenderloin and chicken breasts so I can try to replicate Anna's Famous Pork Tenderloin.

A few days ago I helped run the grill for a favorite restaurant during their packed Valentine's Day dinner. At Anna's Greek Restaurant, Anna really does do the cooking. So while I helped grill pork tenderloin, chicken breast, bacon-wrapped filets, shrimp, etc., I was also trying to watch a real chef in action doing real chef stuff. I did figure one recipe out!

Next up, time to grill the rest of some bacon we recently made. It was my first attempt at curing and smoking bacon, and fortunately I had a recipe from Bill at Stoney Creek Farm. Bill makes my all-time favorite bacon -- it's sweet & smokey, no pepper. Sounds weird, but tastes great and cooks up real nice. Thing is, Bill's bacon is hard to come by and not always available, so good thing we now know how to make it! It's even better when grilled, of course...


They're gonna love this when I'm out of town! Little Man must have his bacon every morning, and this is better than most.

Finally time for a stir-fry in the snow. My friend Grace Young loved it when we did one of her recipes on the grill during last year's Polar Vortex (less snow; way colder), so I wanted to send her some more stir-fry-in-the-snow shots. Also, I had a few more food bits from the farm to use up. And some pineapple. 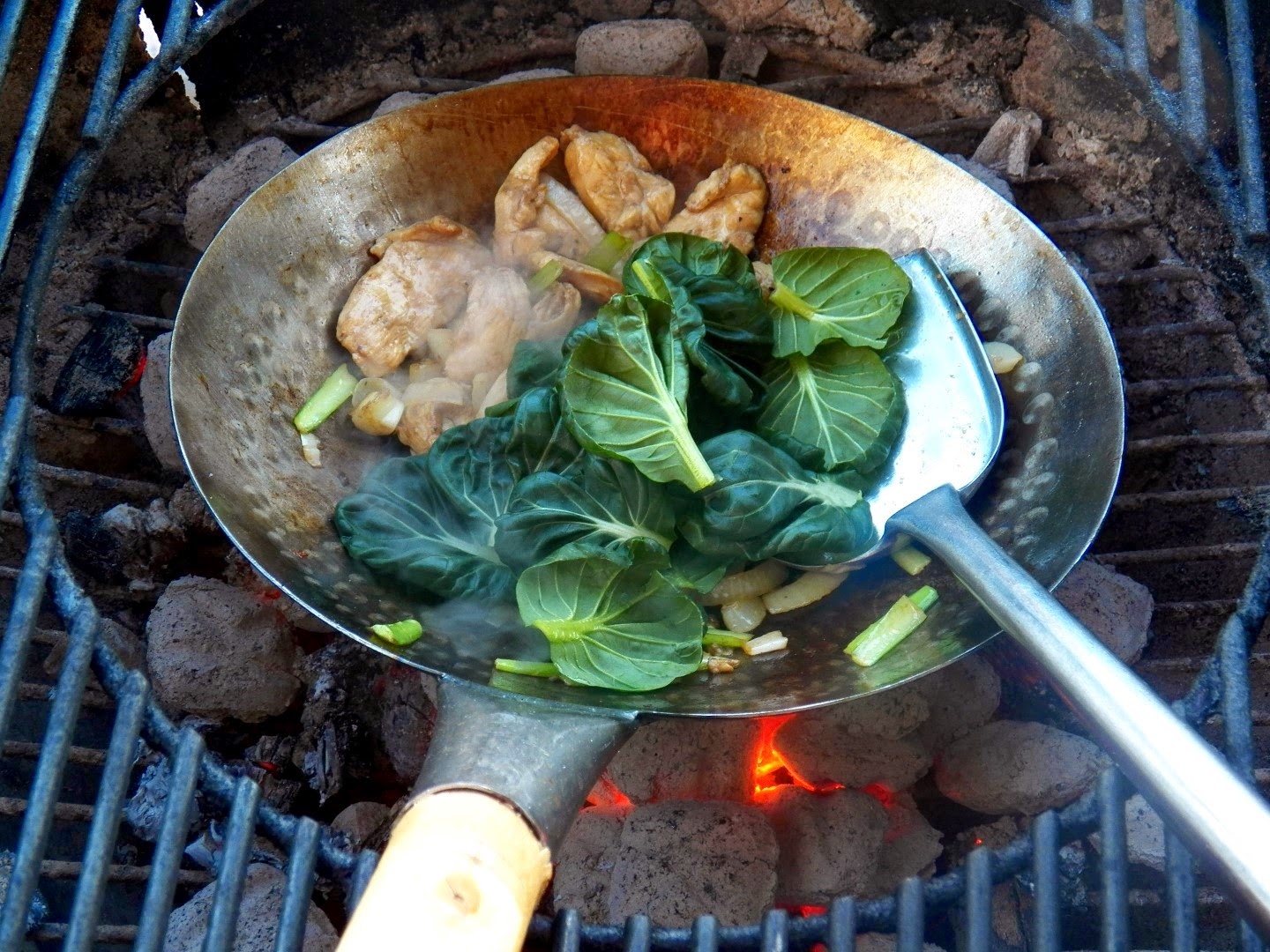 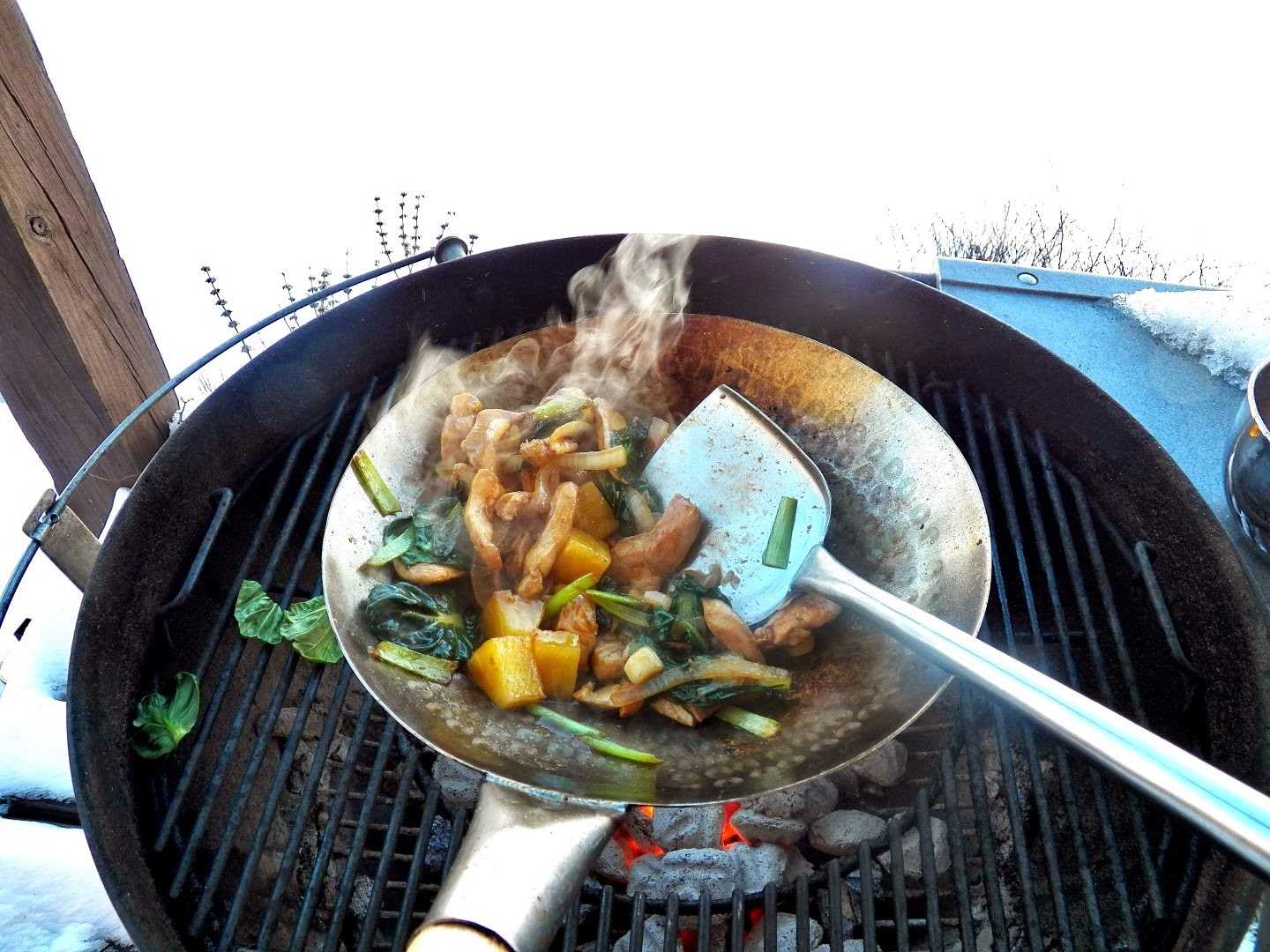 So, that was fun. On the third day we did some more sledding and I did some packing. The family was still snowed in when I headed for the airport in the middle of the night, but they had plenty of food!

UPDATE:  I made a point to send a postcard every day I was gone. I think they liked them... well, most of them.

UPDATE II:  About those smoked beef ribs we froze before the trip -- they were thawed and braised in a coffee & rum concoction that was turned into a sweet sauce, and they were killer. I didn't exactly take notes, but I hope to try again and turn it into a recipe post on Rob's Grill's Recipes.