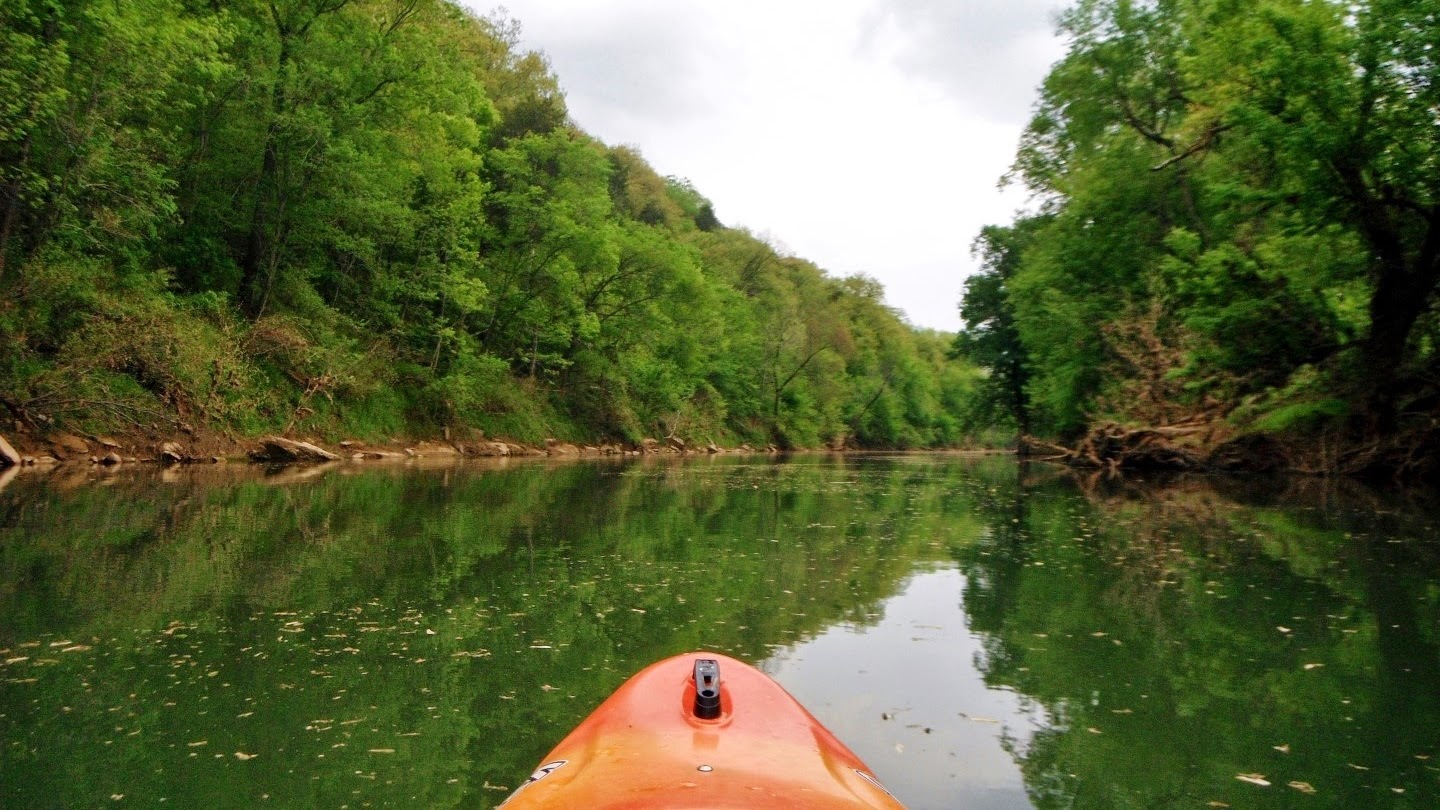 Sometimes we trade motorcycles and minivans for Jeeps and boats.

They say Kentucky has more navigable water than any state that isn't Alaska, and this is the section we most often navigate. The route on Drakes Creek between Romanza Johnson Park and Phil Moore Park has become quite popular over the last few years, probably because the location just a few miles outside of BG is so accessible to so many, and because it's so easy to park at Romanza and take out at Phil Moore. The parks are separated by less than five miles of road, and the 6.23 mile creek route can be paddled in less than three hours on most any day. It is a very convenient way to spend some time relaxing on the river.

Below are pictures from two trips this year, and at the very bottom is a time lapse video of the whole route. The first trip was fun because it was the maiden voyage for two kayaks and for our 13-year-old. The second trip was fun because I joined some guys from the Bowling Green Riverfront Foundation and the Warren County Rescue Department in preparation for the first HSK Race on the River Fest benefiting Hospice of Southern Kentucky.


If your family has ever needed their services, then you know the good folks at HSK are doing important work, and this sure will be a fun way to help them out.

It's gonna be a great Saturday in Alvaton... In the morning we have BBQ from Jimmy D's, live music, and paddling on the creek. Later that afternoon the Boyce Store is having their first Pickin' on the Patio Summer Music Series event with, you guessed it, more BBQ! In between the creek and the store, there will be plenty of time to stop by Reid's Livery Winery to do a little tasting and shopping there, too. And later that evening the Neon Flamingo has more live music, and mostly likely more BBQ, too. This little corner of the county is packing plenty of fun into one day.

Clinton Lewis from BGRF brought a GPS on our latest trip, so this shows the exact route we took on June 8th. The creek flows south-to-north and it was 6.23 miles. It took just over two hours, even though we were in no hurry and we stopped here and there to pick up trash. Technically, we really start in Trammel Creek and it meets Drakes Creek just a few yards downstream.


If you're leaving a car at Phil Moore Park, you'll want to park on the Old Stone side of Scottsville Road in the big grass field. You can park on the gravel road near the bridge on the baseball side of the park, but it's a lot easier to take your boat out of the creek and load up your vehicle on the grassy side.


Romanza has a big gravel parking lot which often fills up on summer weekend days, but there is plenty of room to park along the road after unloading.


Before the big bridge was built on Mt. Lebanon Church Road, this was not a park. It was just a road, although like other similar water crossings in the area it sometimes seemed like a park because it was a fun place to play. Good times spent here as kids on bikes, and now you don't have to dodge traffic. In normal water conditions like this, the easiest spot to put it is just to the right of the old road where the rocks gently slope down to the creek.

I knew he had fun because he said so, but also because I caught him with several of those sincere grins when he didn't think anybody was looking. Eh eh...

It didn't start out as a very beautiful day, but it turned into one. This was a fun trip for me because it was nice to make some new friends. The folks at the Bowling Green Riverfront Foundation have really neat plans to create the Barren River Outdoor Center that will certainly make Bowling Green even better. The BROC will feature white water boating, mountain biking, climbing, and other outdoor activities. The Warren County Rescue guys volunteer their time to save lives, and of course that's pretty cool. I think both groups deserve our support, and both groups are supporting the River Fest Race next weekend. Awesome.

On this trip we came across two newly downed trees that were blocking the creek. And on the bright side, neither seems to pose a very serious problem.


When the water is about normal, the only really low spot you should encounter is at the very beginning of the trip before Trammel Creek meets Drakes Creek. You can get through it with the right line, or you can just walk for a few feet.

This first downed tree has a good gap in the middle that all of our boats fit through, but it would also be easy to walk around the tree on the left side.


This second tree was pretty much impossible to paddle around, but there is a gravel bar perfectly positioned on the right that makes for a really quick and easy portage of just a few feet.


At the take out spot, there are several options when the water level is pretty normal.

Thanks to the Farewell Drifters for letting me use one of their songs...

The HSK Race on the River Fest went well -- great group of folks and great weather. Pics and another creek video from that event can be found in this post.